Fun Facts About Skunks: The Stinky but Adorable Mammals 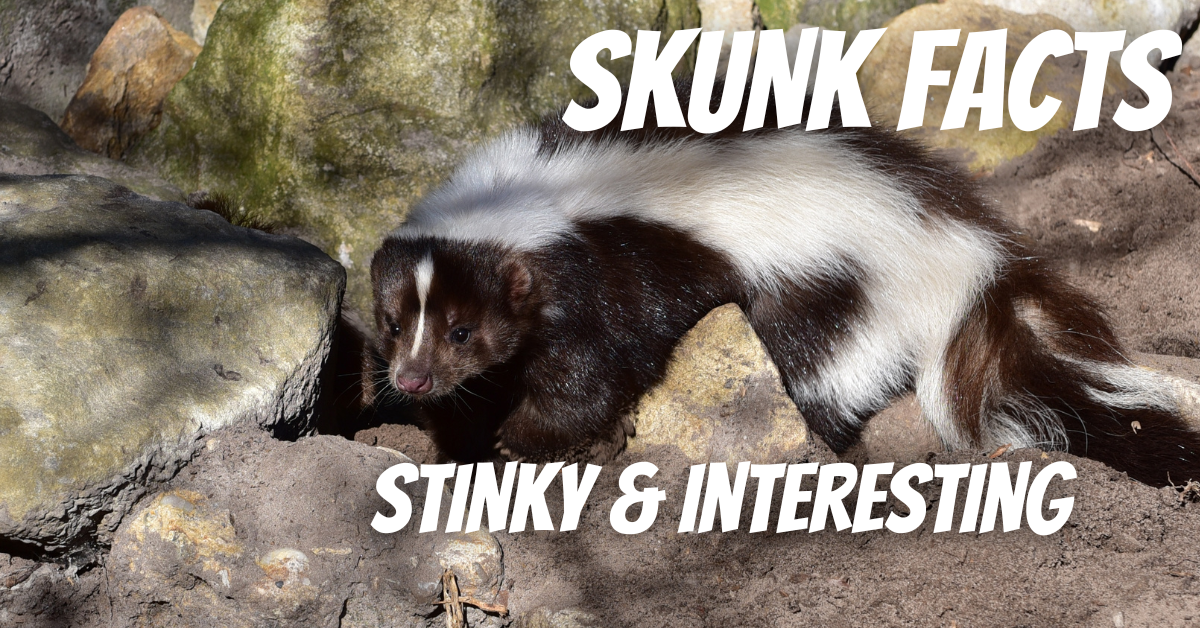 Skunks are one of the most recognizable mammals in North America, thanks to their unique coloring and smell. While they may be infamous for releasing a smelly spray when threatened, skunks are actually quite adorable creatures! In this blog post, we will discuss some fun facts about skunks.

We’ll cover everything from their diet and habitat to their reproductive habits! So if you’re curious to learn more about these stinky but lovable animals, keep reading!

Skunks are not members of the mustelid family

The mustelid family is a taxonomy that the skunk used to belong to. This taxonomic family contains otters, wolverines, and even honey badgers!

Scientists initially believed that they belonged in the mustelid family because of the resemblance to all the other aforementioned animals.

You’ll likely have already begun to notice similarities between these different species yourself!

Instead, skunks belong to the mephitidae family. This family contains skunks and stink badgers. I feel kind of bad for the latter. A name like that can’t be easy to deal with.

2. Skunks are omnivorous animals, meaning that they eat both plant and animal material.

Their diet consists of things like fruits, vegetables, insects, small mammals, and eggs. A skunk’s diet will change over the course of seasons due to food availability.

Skunks have also rarely been spotted eating dead carcasses of animals such as birds or rodents. This is not common behavior.

One interesting fact about skunks is that they have a mini-hibernation period during the winter months. Skunks stock up on food to build a thick layer of fat to keep themselves warm and metabolize slowly over the winter months.

During this period they rarely leave their dens

Hmmm. Sounds a lot like me during the winter.

Skunks are not only related to honey badgers but also share their taste for insects. Because of the skunk’s thick skin, they don’t have to worry about the bee’s otherwise powerful sting.

Skunks have an extremely clever tactic to feed on honey bees.

They scratch the front of the hive, causing bees to come out and investigate. Once the bees leave the hive the skunk will proceed to devour them, making for an easy meal.

Mother skunks have been shown to teach this to their pups. Mother of the year award.

While their other senses make up for it, skunks have terrible eye-sight. They rely on their sense of smell and hearing to detect predators and prey.

Skunks are also nocturnal animals so they do the majority of their hunting and scavenging at night.

This is likely because it’s easier to avoid predators when it’s dark out and there are fewer people around.

It’s also easier to find food at night since many animals are asleep. Although, if there is a lot of competition for food from other nocturnal animals, skunks have been known to come out during the daytime.

The mating season for skunks typically falls between late winter and early spring. During this time, male skunks will follow around female skunks until they are ready to mate. Once a female is ready to mate, she will allow the male to approach her and the two will mate.

After mating, the female skunk will give birth to a litter of anywhere from one to twelve baby skunks (called “kits”). The kits are born blind and deaf and are completely dependent on their mother for survival. After about two months, the kits’ eyes and ears will open and they will begin to explore their surroundings.

Skunks are relatively solitary creatures and only come together to mate. However, during the winter months, skunks will often share dens in order to stay warm. Only the females, however, as the males will find their own den.

Other than that, skunks typically live alone and only interact with other skunks when they are ready to mate.

Even mother skunks and their kits will eventually part ways, with the mother going off on her own and the kits going off to find their own dens.

Fun fact: A group of skunks is called a “surfeit”.

Well, there you have it! Some fun facts about skunks. Next time you see one, maybe you’ll think twice before running the other way! Or maybe not, I don’t blame you.

We will leave a small FAQ at the end about skunks

What do skunks eat?

Skunks are omnivores, which means they will eat both plants and animals.

Basically, if it’s edible and they can get their hands on it, they’ll eat it.

This makes them opportunistic feeders which means they will take advantage of whatever food is available to them.

If you have a pet skunk you can even feed them dog or cat food. This isn’t recommended long term, as it doesn’t contain vital nutrients a pet skunk might need.

What is the lifespan of a skunk?

In the wild, skunks typically live for two to four years. However, skunks that are kept in captivity often live much longer.

This is due to the fact that they are not exposed to the dangers of the wild, such as predators and diseases.

Captive skunks have been known to live for up to ten years, although the average lifespan is still relatively short in comparison to other pets.

Skunks are also susceptible to various health problems, which can shorten their lifespan even further.

The oldest recorded captive skunk lived to be over twenty years old!

What is the purpose of a skunk’s scent?

A skunk’s scent is used for both defense and communication.

The stinky spray is used to deter predators and ward off other animals.

Skunks will also use their scent to mark their territory.

The scent is produced by glands located near the skunk’s anus and can be sprayed up to 15 feet away!

When a skunk feels threatened, it will usually give warning signs before spraying.

These warning signs include stomping its feet, hissing, and raising its tail. If these warnings are ignored, the skunk will spray its attacker with a foul-smelling liquid.

The scent of the spray can be so strong that it has been known to cause people to vomit!