Bat Facts – Do You Know Them All? 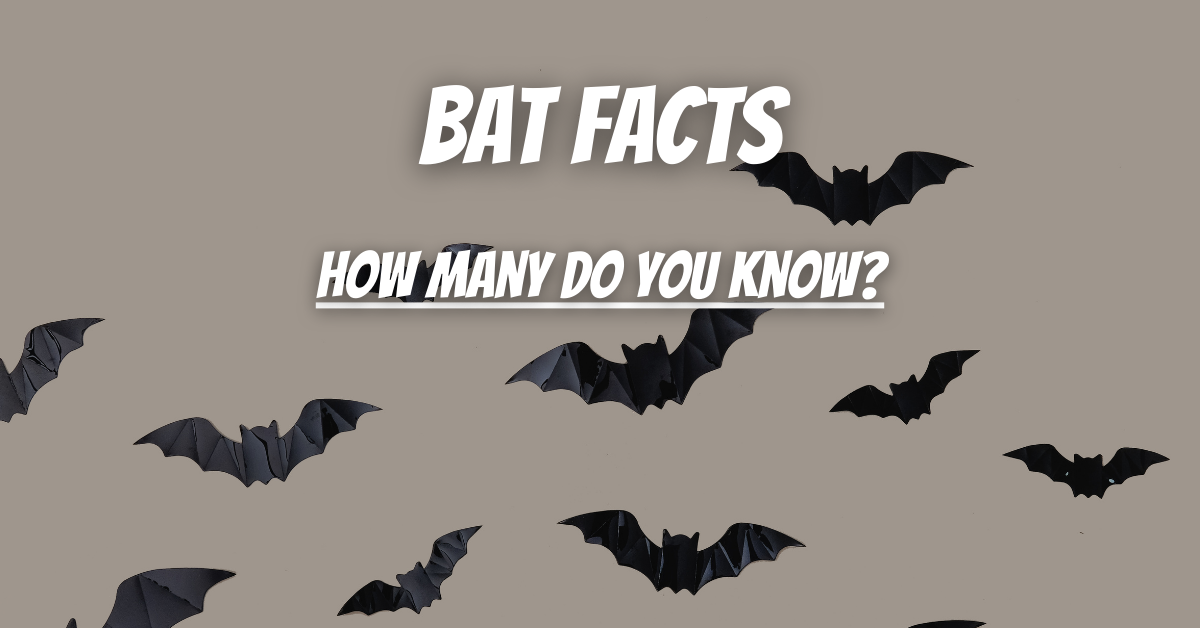 Bats are one of the most diverse groups of mammals on the planet, with over 1,200 different species worldwide. Although they have a reputation for being spooky and associated with Halloween, these nocturnal creatures are actually incredibly interesting and play an important role in many ecosystems.

So we’ve come up with a list of five bat facts! There is a lot to enjoy about these flying mammals. You’ll likely come away having a newfound appreciation of these often misunderstood creatures.

1. Bats are the only mammals that can truly fly

Did you know that out of all of the many mammalian species in the world, the bat is the only mammal that can fly? That’s right, bats are the only mammal with the capability of powered flight. Although there are other mammals that can glide for short distances, such as flying squirrels, they cannot sustain powered flight as bats can.

Bats are capable of this sort of flight due in large part to how their wings are structured. They have a similar amount of control in their wings as humans do in their hands. The image above shows this perfectly.

Winged creatures like owls or birds usually don’t have this much control over their appendages.

There are roughly 1,400 different species of bats in the world. This makes them one of the most diverse groups of mammals on the planet. Bats can be found on every continent except for Antarctica. For obvious reasons.

A quick yet nowhere near exhaustive list of bat species:

3. Bats are important pollinators and help to spread fruit seeds

Bats play an important role in many ecosystems. One of the ways they do this is by acting as pollinators for a variety of different plants. They also help to spread fruit seeds which leads to new plant growth. This is beneficial for both the bats that rely on fruit for food and the plants that need bats for pollination and seed dispersal.

In this way they function much like bees and birds, pollinating and allowing many plant species to flourish.

Bats are also quite helpful for dealing with insects. A single little brown bat can eat up to 600 mosquitoes in an hour! Their gluttonous appetite for these pesky insects allows them to eat somewhere in the range of 6,000 insects in a single night.

So the next time you are outside not getting constantly bit by mosquitos, remember to give your thanks to the bats in your region.

4. Bats use echolocation to navigate and find food in the dark

Bats are nocturnal creatures and thus have to rely on their other senses to compensate for the lack of light. One way they do this is with echolocation.

Echolocation is basically a form of sonar. Bats emit sound waves and then listen for the echo bouncing back. By interpreting the echoes, they are able to figure out the location, size, and shape of objects around them. This allows them to navigate in the dark and find food.

This unique way of finding food is one of the more commonly known facts about bats. Certainly a fun one as well. I imagine screaming to find my food wouldn’t be as welcomed in a restaurant though.

Bats are exceptionally long-lived creatures. In the wild, they can live for up to 30 years. This is much longer than the average lifespan of most mammals their size.

The record for the longest-lived bat belongs to a male Brandt’s myotis. Located in Siberia and was measured by researchers who attached the band around its leg in 1964. Truly impressive.

Bats aren’t immortal but live for an extraordinary amount of time compared to similar-sized animals. Perhaps this is why bats are referenced in vampire lore.

These are just a few of the many interesting facts about bats. We hope you found them as fascinating as we do!

Owl Facts – Did You Know?