Owl Facts – Did You Know? 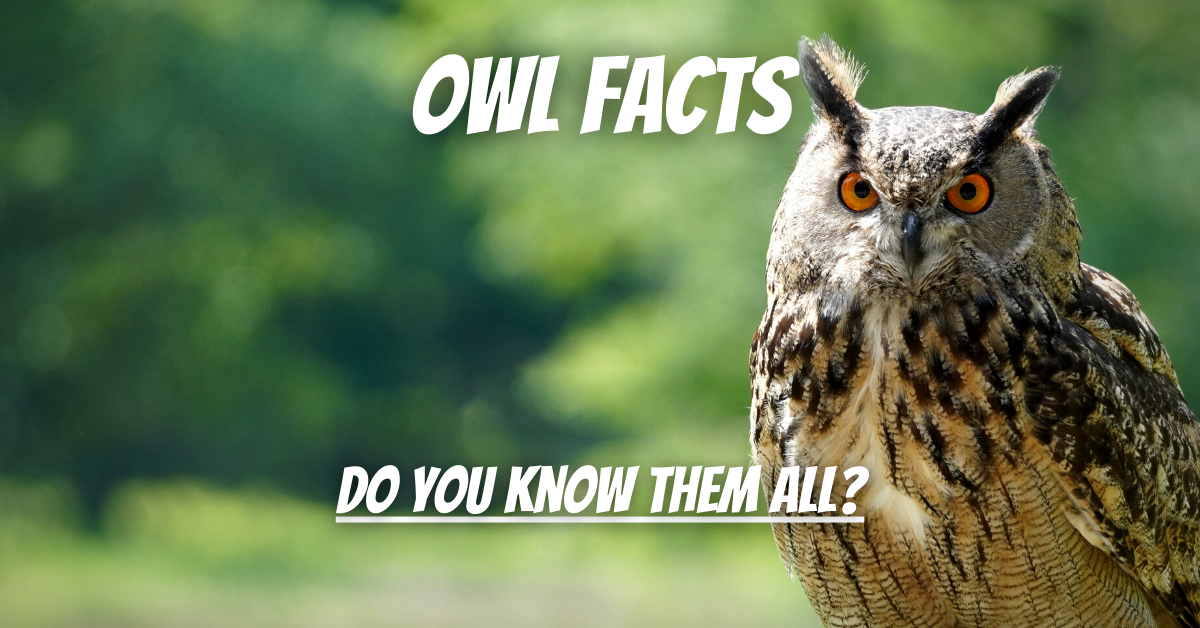 Owls have been popular in media for decades now. Harry Potter’s Hedwig is a great example of how much love owls have received in recent years. To continue the tradition, we will be going over five owl facts you might not have known.

For starters, did you know that owls are nocturnal creatures? That means they sleep during the day and are awake at night.

You probably did. But, the rest won’t be so easy.

1. Owls have very good eyesight. In fact, they can see up to eight times better than humans in low-light conditions

For our first fact, did you know that owls have amazing eyesight? Being nocturnal predators, owls have adapted to hunting various prey in the dark. Because of this, owls have an insanely good vision which allows them to see many many times better than humans, especially in low-light conditions.

A secondary tidbit here is how owl necks work. They can famously rotate their heads 270 degrees with ease. This impressive display that defies what we understand from an anatomic point of view has been solved by scientists.

Apparently, owls can turn their heads 270 degrees because of how their arteries work! Without boring you with the explanation, their arteries allow them greater flexibility in their necks! Whereas human arteries do not allow for such movements.

2. Owls have very good hearing. They can hear ten times better than humans, which helps them to find their prey in the dark

Owls, much like other predators, have amazing hearing. This ten times better hearing allows them to find small prey in complete darkness.

How is this possible? Well, owl ears are asymmetrical, meaning they are of different sizes and shapes. This difference in size allows owls to pinpoint the direction a sound is coming from with great accuracy. You can test this out yourself by having a friend make noise while hiding behind something. The owl will be able to tell exactly where the sound is coming from!

3. Owls are very quiet flyers. Their feathers are specially adapted to help them fly without making any noise

Owls are some of the stealthiest predators in the animal kingdom. One of the main reasons for this is how their feathers are adapted to allow them to fly without making any noise.

This is an important trait for owls because it allows them to surprise their prey and get close enough to catch it before it has a chance to escape.

Owls have specially adapted feathers that help them to fly without making any noise. These feathers are known as “silent flight feathers” and they are found on the leading edge of an owl’s wing.

These feathers are different from regular feathers because they have a special fringe that helps to break up the airflow and prevent it from making any noise.

Now, this doesn’t mean owls are slow either. Unlike ground predators that have to worry about scaring their prey by going too fast, owls can move stealthily in the air at speeds of up to 40 miles per hour!

Quite the impressive speed. Not as quick as some bats, but nothing to scoff at.

Owls are some of the most effective predators in the animal kingdom. One of the main reasons for this is their diet. Owls mostly eat small mammals such as mice and voles.

The reason owls are so effective at hunting these small mammals is because of their excellent hearing and eyesight which we talked about earlier.

Their hearing allows them to locate their prey in the dark and their eyesight allows them to see the small mammals even when they are hiding in the long grass.

5. Owls are found all over the world. There are more than 200 different species of owl, and they live in every continent except Antarctica

Owls are found all over the world, with more than 200 different species living in every continent except Antarctica. The most common type of owl is the barn owl, which is found in Europe, Asia, Africa, and Australia.

What Species of Owl Was Hedwig?

The species of owl that Hedwig was in Harry Potter was the snowy owl!

Did you think I would mention Hedwig without answering this question? I would never leave you hanging like that!

A couple of fun facts about Hedwig specifically:

Make sure to check out our other animal facts on the website and even consider subscribing to the newsletter for first looks at new articles!

Bat Facts – Do You Know Them All?