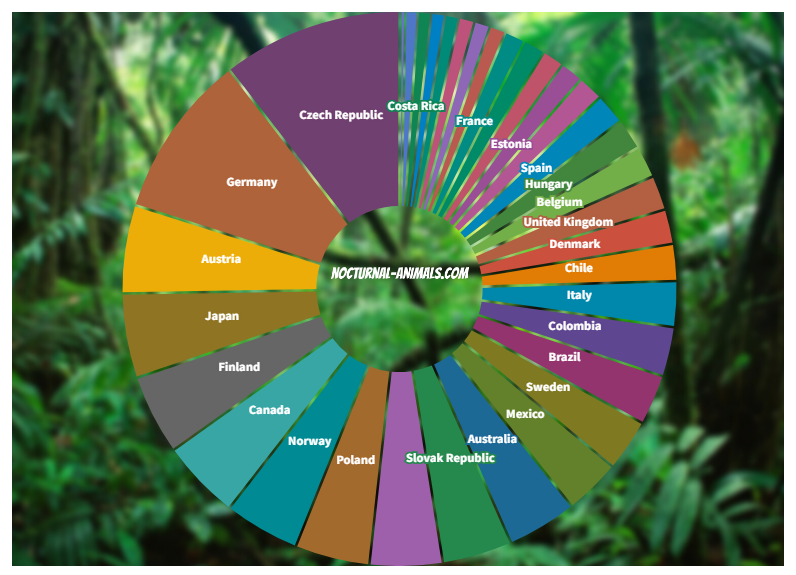 Over many millennia, there have been plenty of extinction events. Five, to be exact. However, many believe we live in the sixth extinction event caused by human activity. To illustrate this point, we have looked at data from the OECD that shows the number of endangered species by country.

We have created multiple charts to show the data more accurately.

The data for species in the endangered species charts include:

As you can see in the chart above, the number of endangered species by country is very high. The Czech Republic has the most endangered species, with 1,905. However, only a small portion of these (~200) is actually (non-invertebrate) animals. The rest of the staggering amount comes from invertebrates (a whopping 1,173) and some plant & moss species.

Some examples of invertebrates include:

How Many Endangered Species Are There in 2022?

There are over 18,000 species on the endangered species list as of 2022. In addition, there are many more on the IUCN red list. Keep in mind that this includes both plant and animal species.

This number is way up from last year and continues to grow.

The Most Endangered Animals in the World

Random numbers on a chart might illustrate the morbid reality of endangered species statistically, but they don’t have the same emotional weight as actually seeing the animals yourselves. So here I will show you the most endangered animals in the world!

The Javan Rhino is one of the most endangered animals on the planet. With a population of only 75 in 2021. Technically, they have increased their numbers from 2021-2022. However, there was only a single birth, leading to a total population of 76 in 2022.

Vaquitas are the most endangered sea mammal on the planet. In 1997 there were around 600 vaquitas surveyed, and only 11 years later, in 2008, there were 200 left. This rapid decline was due to fishermen using gillnets, a wall of netting that would often trap vaquitas and cause them to drown.

There are estimated to be only ten vaquitas left.

Reported to be “the world’s rarest cat,” the amur leopard is a big cat species found in far east Russia and northeast China. Poaching and habitat destruction has caused the amur leopard population to decrease to around 100.

Thankfully, conservation efforts seem to be working, with surveys estimating about 120 amur adults still exist in the wild.