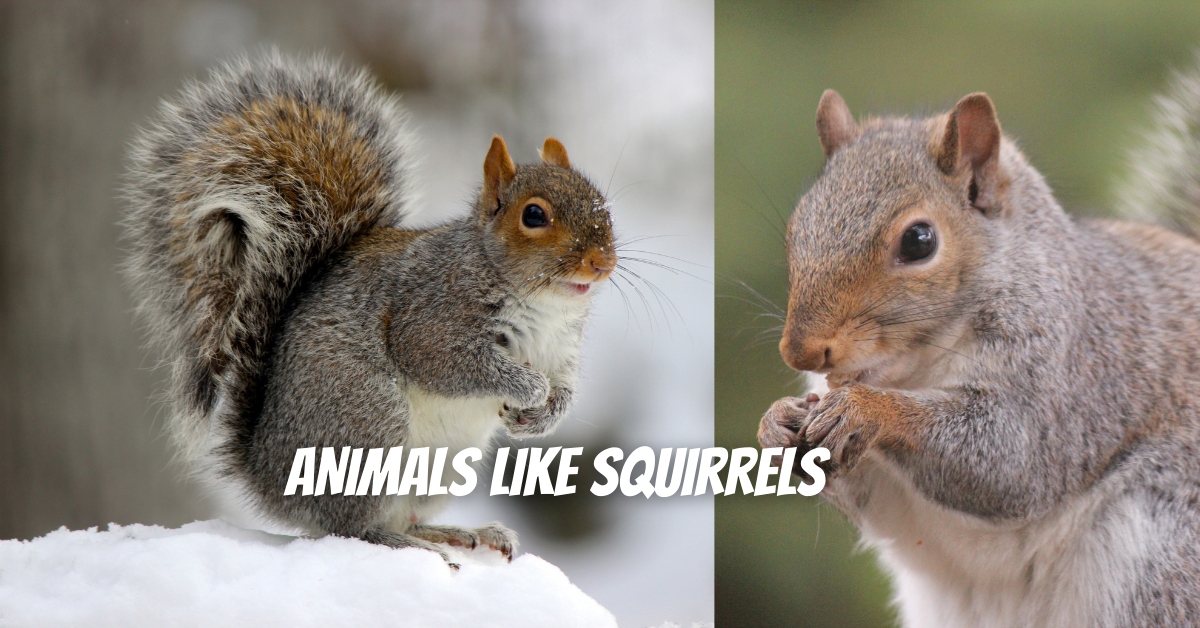 There are a surprising number of animals in the world that look remarkably like squirrels. In fact, there are so many that it can be hard to know which ones to focus on. But don’t worry, we’ve got you covered. Here are six animals that look like squirrels.

Sugar Gliders are marsupials that resemble a squirrel in size and coloration. They have grey-brown fur, big eyes, and a long tail like a squirrel. Their fluffy exterior helps them maintain their body temperature while gliding from one tree to another.

Although sugar gliders are somewhat similar, upon closer inspection, you’ll notice they don’t really resemble squirrels all too much. Some of the other animals on the list pass as doppelgangers much easier.

One key difference between possums and squirrels is their physical appearance. Possums have a more slender body with a pointed snout, small ears, and a long, hairless tail. Squirrels have a more compact body with a round head, large ears, and a bushy tail. You likely won’t be mistaking one for the other unless it is very dark.

Another similar animal to squirrels, prairie dogs are a type of rodent native to the grasslands of North America. They are known for their elaborate burrow systems and their social behavior, which includes vocalizations and hand gestures.

Prairie dogs also have distinctive markings on their face and body, with a white muzzle and black and white stripes on their tail. However, they still bear a small resemblance to squirrels.

Marmots look just like squirrels with their thick coats, long tails, and big ears. However, marmots are typically much larger than a squirrel, and they have shorter snouts that help them forage for food in the ground.

Because the marmot inhabits a different area than your average squirrel, and because they scavenge for food in different ways, their appearance is going to be far less similar than, say a squirrel and chipmunk. Even still, a marmot is another animal that looks like a squirrel.

Groundhogs, also known as woodchucks, are a type of rodent found in North America. They are well known for their burrow systems and their habit of coming out of hibernation on February 2nd to check for their shadow.

In terms of appearance, groundhogs are similar to squirrels in their size and coloring, but they have a more stocky build and a shorter, less bushy tail.

However, groundhogs are generally larger than squirrels, with a more stocky build and a shorter, less bushy tail. They also have a shorter, rounder snout and small ears, whereas squirrels have a longer, pointed snout and larger ears.

The beaver is another animal that looks like a squirrel but is much larger in size. They have thick fur, webbed feet, and a large, paddle-shaped tail that helps them swim. You’ll notice right away that beavers are far far heavier than your average squirrel. Not even the chunkiest of local squirrels would be able to stand up to a normal sized beaver.

Even still, they both belong to Rodentia and are, therefore, quite alike.

Chipmunks are small, striped rodents found in many parts of North America and Asia. They are known for their distinctive chirping calls and their habit of hoarding seeds and nuts. Chipmunks are similar to squirrels in their size and coloring, but they have a more compact body and a shorter, bushier tail. They also have distinctive black and white stripes on their faces and bodies, which help to distinguish them from squirrels.

On average, you’ll find chipmunks to be much smaller than a squirrel, but they seem to inhabit similar areas and exhibit similar behaviors. Essentially mini-mes!

If you look closely, the similarities between these animals and a squirrel become quite clear. From the Sugar Glider to the Chipmunk, there are plenty of creatures that look like a squirrel – some more than others!

Do Otters Mate for Life?