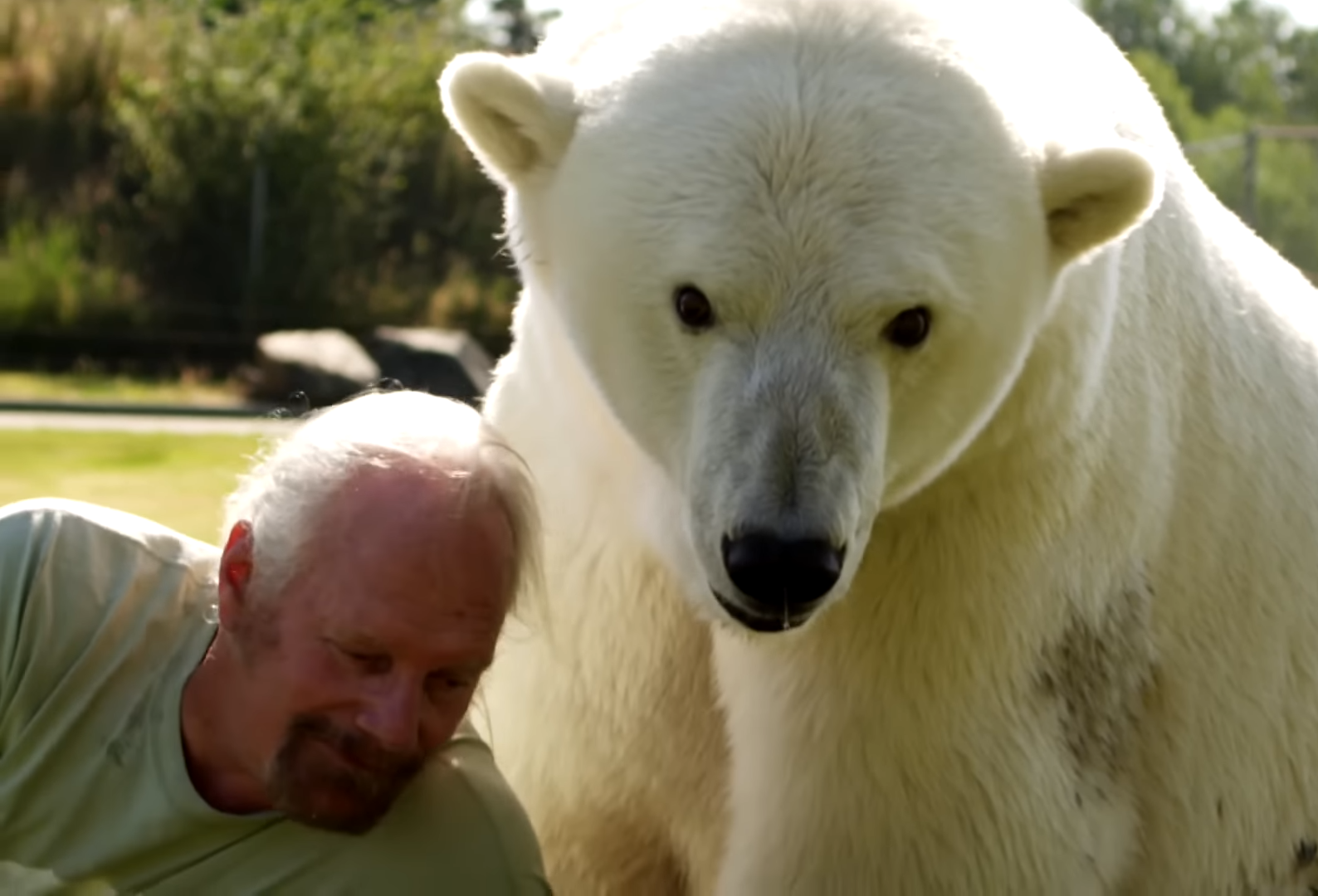 Top on the list of the most uncommon animal friends might be polar bears and humans. Not only do polar bears mainly reside in climates inhospitable for humans, but they are also…. bears.

But, despite this, Mark Dumas has raised Agee the polar bear to be a loving and sometimes jealous companion.

Mark is an animal trainer in the movie industry, and over 18 years ago, he was tasked with finding a polar bear for a movie. At a nearby zoo, a polar bear cub was being hand-reared by staff because the mother was too old to care for it properly. Something that can happen at zoos, where animals have far-extended lifespans.

So, Mark decided to take care of her himself. And ever since then, Agee has been under his care.

His main goal was to train her for the film, but he could never have expected how close they would get.

At first, it was simply just his job. Mark had to train her for the movie, and that was it. Many animals are used on movie sets, and most don’t stay with their trainers afterward.

However, an unspeakable bond had started to grow between Mark and Agee.

“It’s what I had to do, and as I’m doing it I became very very attached to her”

She purrs when he’s near

Mark himself admits that he genuinely loves Agee. Although, he is too humble to admit how much she loves him.

“I love her a lot, I can’t say that she loves me. She really is bonded to me”

While Agee herself can’t quite speak on the matter, she has a unique way of showing her love.

Anyone within earshot can hear a low rumble anytime Agee is with Mark. Sounding more like an engine running, this is Agee’s “purr.”

When Agee is super content and rather comfortable, aka, when she is with Mark, she sucks on her tongue, which creates this purr.

Agee is a jealous bear

Agee might be quite enamored with Mark, but don’t let this fool you into thinking she’s just a big cuddly bear. Anytime anybody takes Mark’s attention away, Agee does not like that.

“When someone starts talking to me, takes my attention away from her, she gets upset about it”

There isn’t much room for anyone else in this bear’s heart. Although Mark’s wife is still allowed to talk to him, thankfully.

Agee and Mark love going for swims in their backyard pool. Obviously, polar bears weren’t exactly made for living in warmer climates, so having regular swim dates helps cool her off.

Needless to say, there are quite a few years left for Agee and Mark to enjoy. And they seem like they’ll be loving life together for many years to come.

If you enjoyed this story, sign up for our newsletter or check out some of our other articles!

Make sure to share this amazing story with your friends!

The “chill” life of bison in sub-zero temperatures