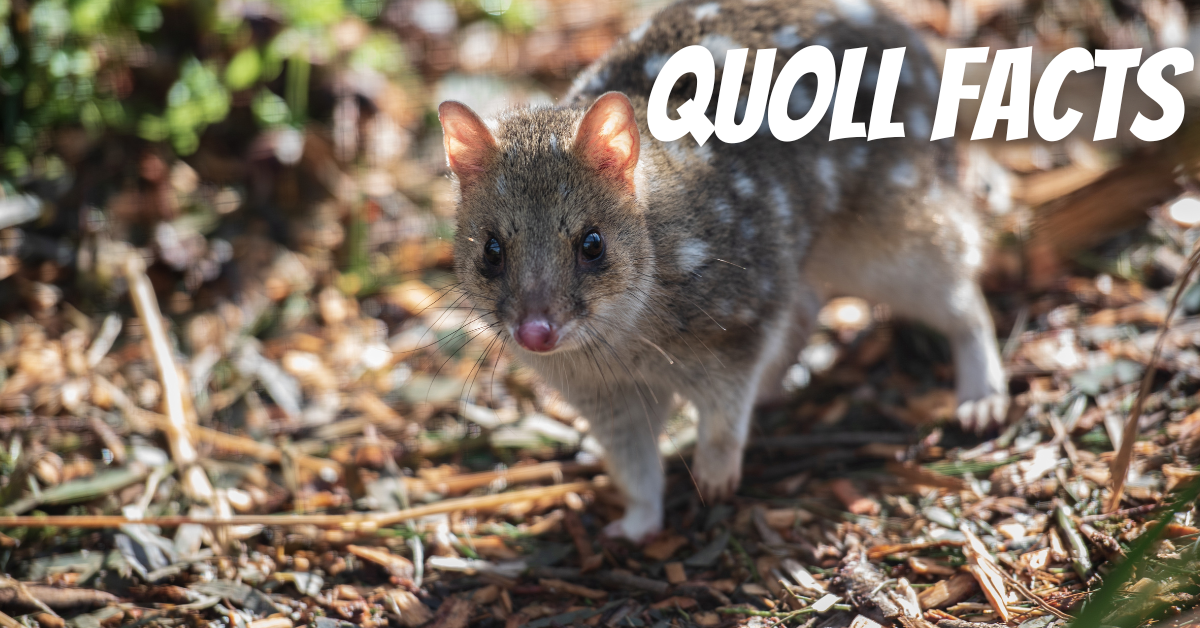 Do you know what a quoll is? Chances are, you have never heard of this animal before. Quolls are native to Australia and Tasmania, and there are five different species of them. They are the size of a domestic cat, and they look like a cross between a ferret and a marten. Quolls are interesting creatures, and in this blog post, we will discuss five fascinating facts about them!

We’ve already written a similar post on 5 bandicoot facts, so make sure to check that out as well!

Quolls have a very strong sense of smell, which they use to find food and mates.

Think you have a strong sense of smell? Think again. Quolls can detect smells up to 100 times better than humans can. They use their sense of smell to find food, and they also use it to locate potential mates.

Speaking of smell, they also have incredibly smelly feces. This leads to our next fact.

You read that correctly.

Quolls will actually defecate when they are ready to mate.

Quolls are solitary animals and as such need a way of signaling to the opposite gender “hey I’m single and available”! Apparently, the way that quolls have evolved to do this is by using their smelly feces.

Silly humans might use dating apps, but apparently, all it takes is some simple scat.

Quolls are excellent climbers, and they often sleep in trees.

All five species of quoll are excellent climbers, and they often sleep in trees.

They have sharp claws that help them climb, and their tails are used for balance. Quolls will also use their tails to wrap around branches when they are sleeping so that they don’t fall out of the tree.

Northern quolls are the most tree-dwelling of all quoll species, and also the most aggressive. Consequently, they are also quite small.

Trees aren’t the places they sleep most commonly, however. Quolls prefer sleeping in hollowed-out dens and or rocky dwellings. Their tree-climbing is mainly a form of predation, where they can catch birds to eat.

Quolls are nocturnal creatures, and they hunt for food at night.

All quoll species are nocturnal, which means that they are most active at night. They use their strong sense of smell to find food, and they will eat just about anything they can catch. Quolls have been known to eat insects, rodents, reptiles, birds, and even other quolls.

They are also one of the few animals that will eat cane toads. Cane toads are an invasive species in Australia, and they are poisonous. Quolls will actually kill the toad and then eat it, making them one of the only known predators of this animal.

Sadly, this has been disastrous for the quoll population. Cane toads have poisonous skin which will kill quolls if they eat them.

Thankfully, quolls have been adapting to avoid the cane toads. Although, this does leave one less predator for the invasive species.

Quolls are very shy creatures, and they’re rarely seen in the wild.

If you’re hoping to see a quoll in the wild, you’re going to have a hard time. Quolls are very shy creatures, and they do their best to avoid humans. They are most active at night, so your best bet is to go out searching for them after the sun has gone down.

Even then, you’re not likely to see one. Quolls are excellent at hiding, and they will usually run away if they sense a human nearby.

One major reason for the lack of quoll sightings is their endangered status.

Quolls are protected by law in Australia, and they’re considered to be an endangered species.

Quolls are one of many endangered species and are protected by law in Australia, as they are endemic to the location.

There are several reasons for the quoll population decrease, but the most significant is habitat loss. Quolls need a specific type of habitat to survive, and as humans continue to destroy their natural environment, quolls are becoming increasingly rare.

Other threats include non-native species, especially the aforementioned cane toad, which poisons many quolls.

Foxes are also an issue. Foxes not only prey on quolls, but they also compete for several food sources. Because of this, foxes, a non-native species introduced in 1855, are being removed from the area.

If we want to save quolls, we need to do our part to protect their habitat.

You can help quolls by doing your part to protect their habitat. This means reducing your impact on the environment and supporting organizations that are working to save quolls and other endangered species.

You can also donate to or volunteer for quoll conservation efforts. Every little bit helps, and we need to do what we can to save these fascinating creatures.

Quolls are an odd animal that can have litters of up to 18 pups, yet only six teats for the pups to feed on. In other words, only six survive. The rest are sometimes eaten by the mother.

This is by far one of the greatest examples of survival of the fittest in the animal kingdom.

Because quolls are marsupials, they actually carry the babies around in a pouch. During the first eight weeks, the surviving quolls will suckle on the six teats of their mother. After those first weeks are up, they venture out of the pouch and start using their mother’s back for another six weeks.

Quolls are amazing creatures with a lot of fascinating facts. They are shy and nocturnal, sleep in trees or dens, have sharp claws, and will even eat poisonous cane toads.

Sadly, quolls are endangered due to habitat loss and introduced predators. We can help save quolls by reducing our impact on the environment and supporting conservation efforts.

Hopefully, you enjoyed this article on quolls and even learned something. Have a nice day!

Fun Facts About Skunks: The Stinky but Adorable Mammals