Otters Diet – What Do Otters Eat? 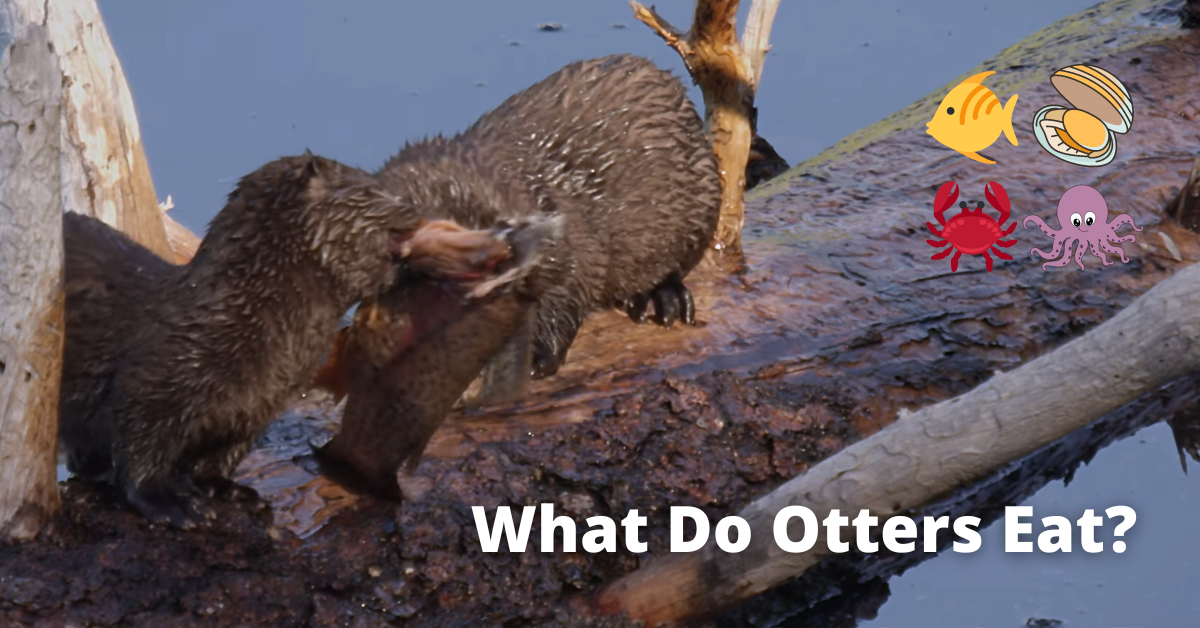 Built to swim and swiftly take down prey in the water otters have a voracious appetite. River otters eat 15-20% of their body weight every day, while sea otters go all the way up to 30%! Otters use this ravenous hunger of theirs to fuel their high metabolism to keep warm.

That begs the question, what do otters eat? Let’s explore the otter’s diet.

As a member of the Mustelidae family, the largest carnivore family, otters are unsurprisingly carnivorous. This means that otters of every kind will mainly receive their nutrition by eating other animals. Small or large.

What Do Otters Eat?

Otters will mainly eat fish or crustaceans with the occasional small animal or rodent they come across. River otters, or freshwater otters, prefer to eat freshwater fish like salmon, crayfish, mussels, frogs, snakes, and some rodents. Sea otter’s diet, on the other hand, contains, large portions of clams, mussels, and other invertebrates.

Different types of otters have different diets. Here is a list of some of the things otters eat:

As mentioned before, otters use a lot of energy to stay warm. This translates into them being efficient predators that focus on eating the easiest prey at the time. Normally, this will include slow-moving fish or clams. An otter’s naturally swift movements and sleek body allow it to quickly snap up most of its prey in the water.

From time to time, if the need arises and they are particularly hungry, otters will go after rabbit dens in search of an easy meal. Eating rabbits only makes up a small portion of an otter’s diet.

For sea otters, one of their main sources of food is a sea urchin. Sea urchins eat kelp which is an important resource for other forms of marine life. By eating sea urchins sea otters are inevitably helping many other animal species and are therefore one of the keystone species.

Because humans hunted sea otters for their fur, sea urchins ended up overpopulating and hurting the environment. Thankfully, there are ongoing conservation efforts to reintroduce more sea otters to these areas and hopefully restore them back to normal.

How Do Otters Capture Food?

Otters are very well adapted to capturing and eating prey wherever they may be found. River otter’s whiskers are actually quite sensitive and allow them to locate prey. Once, found otters can move quickly underwater, dashing at unsuspecting victims. They can either use their surprisingly dextrous paws to crack open their meal or simply their powerful jaws.

Otters are also the only marine mammal known to use tools. When hunting, otters will sometimes put rocks under their armpits (where they luckily have loose skin) so they can use them later to crack open clams or other hard-to-eat snacks. (Study here).

A weird phenomenon to watch is the “anvil technique” that some otters have developed. Otters will find a large rock to place on their belly while they float on their backs and then use said rock to crack open clams, mollusks, mussels, etc.

Although quite ingenious, not every otter uses this technique. Some otter species live in areas where prey is much easier to eat and therefore never have to develop this technique.

What Do Otters Eat in the Winter?

Otters don’t hibernate, so they are forced to get creative in the winter. Otters still eat fish during the winter, but their access to crayfish, insects, and amphibians is cut off.

Otters change their diet and behavior during the winter season. River otters become far more solitary and nomadic during this time of year, foraging for as much as they can and shifting from nocturnal to diurnal.

Oftentimes, otters will use the unwitting cooperation of beavers to their advantage. Taking up residence in dams as dens and using holes beavers make in the ice to go looking for fish. Due to their different food requirements (carnivore and herbivore), they don’t go into conflict and can live near each other peacefully.

What Do Otters Eat in the Wild?

Otters in the wild eat a variety of things like fish, crayfish, mussels, clams, insects, and more. Sea otters will eat things like sea urchins and even octopus!

Otters have been known to specialize in certain types of foods. Choosing to eat one thing over another to make them more efficient predators.

What Do Otters Eat in Captivity?

As you can see, the captive vs wild otters’ diet doesn’t differ by much.

Oftentimes zoos will scatter the otter’s food around to make it more engaging for these small predators. It allows otters to forage like they would in the wild.

To summarize the diet of otters, river otters, both North American and Eurasian, will have a diet consisting mostly of fish. With captive river otters being fed 90% of their meals as fish.

Sea otters eat a variety of different sea creatures with the majority coming from clams. Although, they are notorious for feeding on sea urchins and protecting natural kelp forests.

Hopefully, that answers your question and shows you what the average otter’s diet looks like.