The “chill” life of bison in sub-zero temperatures 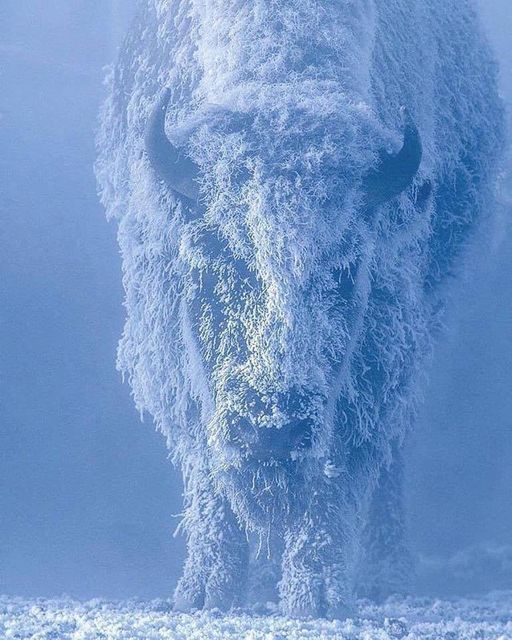 And at negative forty degrees, it takes less than ten minutes to succumb to frostbite.

For humans and most animals, living at such harsh temperatures is impossible. We’ve adapted over the centuries with technological advancements to ward off the cold. I myself start looking like Randy from A Christmas Story if a cool breeze passes by.

And yet, in the North American national parks lives a stoic beast that shrugs off negative temperatures and howling winds as nothing more than a gentle breeze.

Northern American bison once roamed the near entirety of the United States. From the Appalachian Mountains to the Rocky Mountains, the bison could be seen nearly anywhere you went. Roaming free at over 30 million strong.

However, bison were hunted near extinction during the 19th and 20th centuries. Reports indicated that back then, the total number of bison left in North America totaled around 1,000. This was when settlers and pioneers hunted bison not just for meat, as the Native Americans had, but also for sport.

William Frederick Cody, better known as “Buffalo Bill” was alleged to have killed 4,282 buffalo in eighteen months and even won a bison hunting contest in order to keep his nickname. Killing 68 bison in a single hour.

Hunting bison became so popular that railroads advertised hunting bison as an amenity for travelers who would simply shoot bison as they passed and leave the carcasses behind.

One of the more horrific images at the time showed a man standing on a pile (more like a mountain) of bison skulls that would later be turned into fertilizer.

This was, of course, non-sustainable. With 10’s of millions of bison being killed, the North American bison was driven to near extinction.

“The extermination of the buffalo has been a veritable tragedy of the animal world.”

Today, thanks to the introduction of protected national parks and the effort from conservation groups, bison are estimated to have a population of over 600,000. A true testament to how resilient the bison is.

The Resilient Stoic Beast of the Great Plains

As winter comes and the weather turns, the American buffalo doesn’t migrate south for warmer climates. Perhaps one of the greatest symbols of American stubbornness, the buffalo, known for roaming throughout most of North America, endures the harsh and deadly winter rather than retreating from it.

Somehow, the buffalo can not only survive bone-chilling winds in negative forty-degree weather, but they can also do so by munching on just grass through some of the most interesting evolutionary adaptations the wild has to offer.

With four stomachs, a coat so well insulated snow won’t even melt, a head built to plow snow, and skin that thickens in response to the cold, the bison has a nearly perfect adaptation to the cold.

So stubborn and resilient are the bison that when a storm is coming, they turn toward the storm and endure it head-on.

A Stomach That Feeds Itself

Imagine you were about to go through one of the harshest winters of your life. What do you think you would be eating during this time? A hearty chili? Beef stew filled with protein and potatoes to keep you warm and stout? Or would you instead stock up on celery and lettuce?

For most normal people, I can safely assume you would not be choosing the latter. Humans crave filling foods that will get us through the harsh elements. However, bison don’t need to eat the most nutritious meals, because the bison have…..

Want to read the rest of the article? Sign up below

Processing…
Success! You're on the list.
Whoops! There was an error and we couldn't process your subscription. Please reload the page and try again.

10+ of the CUTEST Otter Pictures