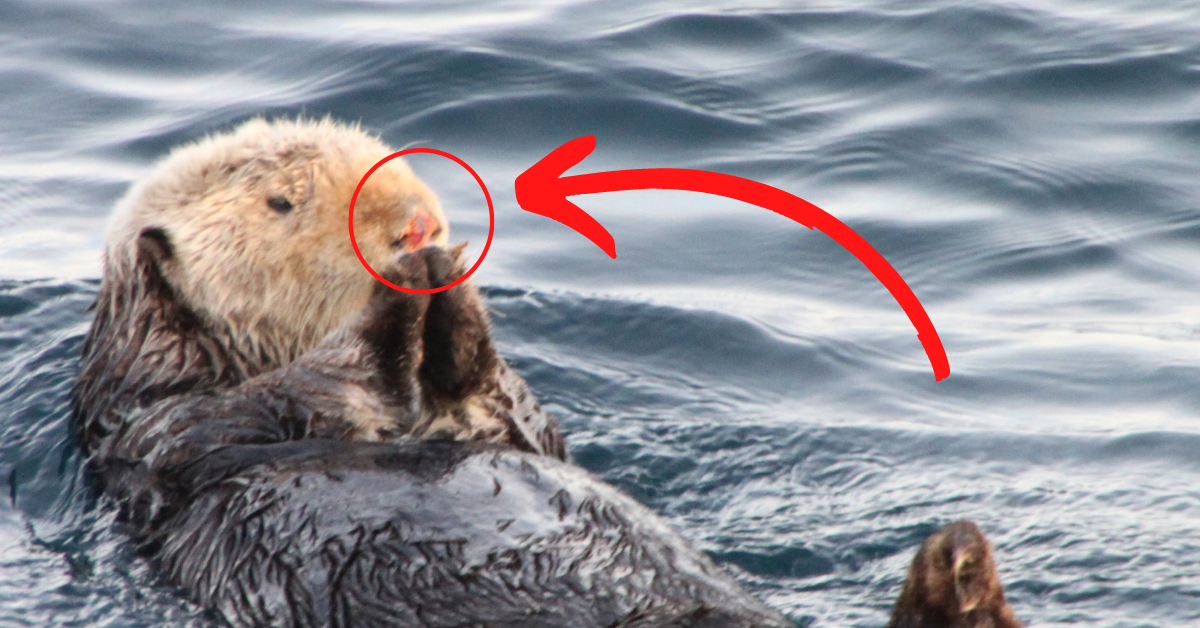 One of the most distinguishing features of a sea otter is its large, black nose pad. For adult females, this nose pad is often covered in pink scars. What are these scars and why do female otters have them? That’s exactly what we’re here to find out.

The scars on a female sea otter’s nose are usually the result of mating. During this process, the male will often grab the female’s nose with his teeth, which can cause wounds. These scars are typically pink in color and can be quite large. In some cases, they may even cover the entire nose pad. While they may be unsightly, they are actually a sign of good health, as they indicate that the otter has been able to successfully mate.

This is why it is usually so easy to determine the gender of a sea otter in a raft (the term for a group of otters). Without having to look at an otter’s genitalia, you can simply look at the nose to figure out which ones are the females. The males, on the other hand, typically have much smaller scars or none at all.

So, why do the males bite the females during mating? It is thought that this behavior helps to ensure that the male is able to mate successfully. By grabbing onto the female’s nose, he is able to hold her in place and prevent her from moving.

Don’t read past here if you want to maintain your love of otters. While sea otters are quite cute, much like the rest of the animal kingdom, they get up to some fairly sickening behavior in the wild. I’m warning you that the following section is graphic in its description and will have you looking differently at the sea otter exhibit next time you visit the zoo.

Some experts believe that the male sea otters bite the female’s nose during mating in order to assert dominance over her. Others believe that this behavior is simply a way for the male to ensure that he mates successfully. Some have even thought that the nose biting might trigger an egg to be fertilized.

Whatever the reason, it’s clear that this behavior can cause a great deal of pain for the female. In fact, many females have been known to bleed profusely from their noses after being bitten by a male. In certain circumstances, this mating ritual leads to drowning.

Those that survive have had male sea otters rip off their noses in some instances.

It is quite an alarming issue. This study of sea otter mortality shows that half of the otters that had cardiac disease had severe nose wounds.

If an otter survives this deadly mating ritual, they are usually safe from any further harm until they finish nursing. There are circumstances of males attempting to mate with female sea otters while they are nursing, but these are rather rare.

What About Male Sea Otters?

Now, don’t think those female sea otters are the only ones that get this treatment. Younger male sea otters have been known to mimic the behavior on each other, causing them to receive similar injuries.

An increase in the sea otter mortality rate which has disproportionately affected the female sea otter population has caused males to be far more aggressive during mating rituals and has even caused them to go after other species. I’ll leave that horrifying fact about what sea otters do to seals in a different article.

So, there you have it. The next time you see a sea otter at the zoo or in the wild, take a look at its nose. If it has a large scar on its nose, chances are good that it’s a female. And now you know why.