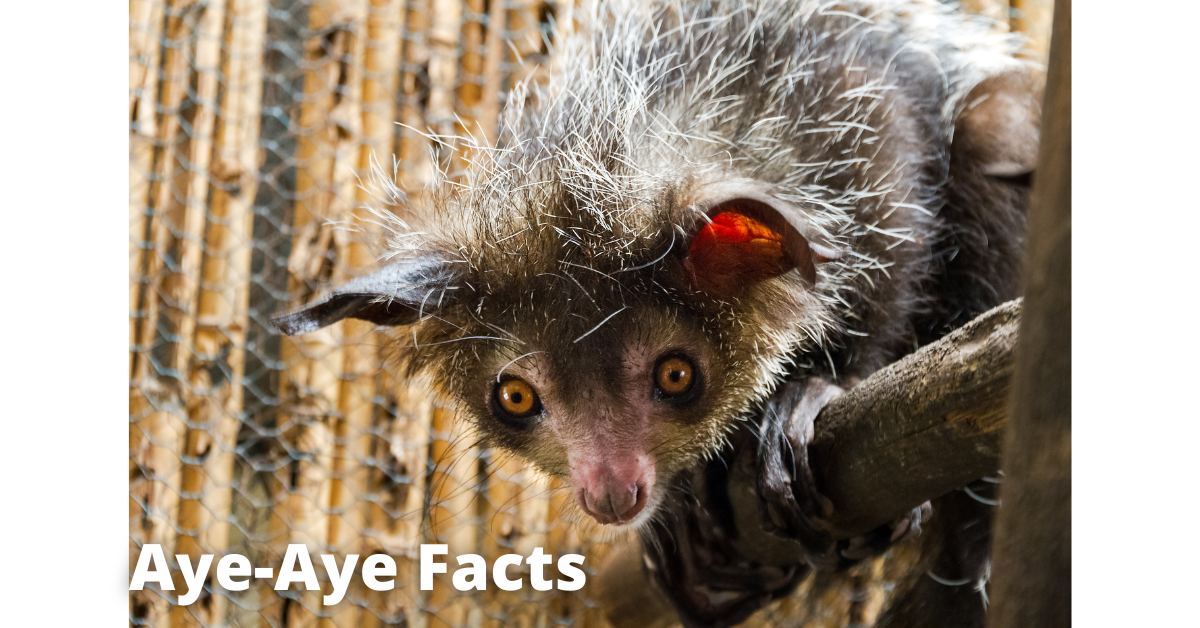 Did you know that there is a primate that is found only on the island of Madagascar? This unique animal is called an aye-aye and it is known for its strange appearance and unusual behavior. In this blog post, we will discuss some fun facts about the aye-aye. We will also explore why this creature is so unique and what threats it faces from extinction.

1. The aye-aye is the world’s largest nocturnal primate.

Not only is the Aye-aye an incredibly recognizable nocturnal primate, but it is also the world’s largest nocturnal primate! The aye-aye can grow to be up to three feet long, with its tail often being longer than its body.

Some other nocturnal primates include the tarsier, the night monkey, and dwarf lemurs. Dwarf lemurs are some of the smallest.

You’ll notice that most of these animals have massive eyes. This seems to be a common trait amongst nocturnal primates.

2. It is also one of the most endangered animals in the world.

The aye-aye is currently listed as one of the most endangered animals in the world. This is due to many factors, including habitat loss and hunting.

The aye-aye is found only on the island of Madagascar, which is home to many unique and threatened species. Deforestation is a major problem on the island, as trees are cleared for agriculture, wood, and charcoal. This destroys the aye-aye’s natural habitat and makes it difficult for the animals to find food.

Superstition isn’t the only reason humans hunt the aye-aye. Others hunt them for their meat, which is considered a delicacy in some parts of Madagascar.

Because of all of these factors, the aye-aye is an incredibly endangered species.

3. The aye-aye has a long, thin tail and large ears

The aye-aye is easily recognizable by its long, thin tail and large ears. The aye-aye’s tail is used for balance and can be up to two feet long. The animal’s ears are also very large, which helps it to hear its prey.

On its tail, the aye-aye has the longest hair of any prosimian. The hair on an aye-aye’s tail can reach over 9 inches long! Making the aye-aye quite a furry little beast.

The aye-aye has an incredibly unique way of finding food. It uses its long, thin middle finger to tap on trees. This helps the aye-aye to find grubs and other insects that are hiding inside the tree.

Once the aye-aye finds its prey, it uses its sharp teeth to gnaw a hole in the tree. It then inserts its finger into the hole and pulls out the grub.

This method of finding food is so unique that scientists still aren’t sure how the aye-aye knows there is food inside the tree!

The aye-aye’s long middle finger also has another use. The animal uses it to communicate with other aye-ayes. When two aye-ayes meet, they will often touch each other’s middle fingers in what is known as a “greeting ceremony.”

In addition to its long middle finger, the aye-aye also has opposable thumbs. This means that it can hold onto things with its hands, like a monkey.

The aye-aye is the only primate that has both opposable thumbs and a long middle finger!

5. It is very difficult to breed aye-ayes

While the aye-aye is an endangered species, there have been some efforts to breed them in captivity. Unfortunately, this has proved to be very difficult.

While not as difficult to breed as quolls, aye-ayes are slow to reproduce. The main reason for this is that females only reproduce once every two to three years! Because of this, aye-ayes aren’t quick to bolster their population.

The reason that the females only reproduce every 2-3 years is because of how long an aye-aye infant (that’s what baby aye-ayes are called) will stay with their mother. Pregnancy lasts six months, weaning lasts seven, and then the young aye-aye will stay with its mother for another year or two.

While this is happening, the female aye-aye won’t reproduce.

This means that aye-ayes have very slow population growth.

The aye-aye is a fascinating and unique animal. However, it is also an endangered species. There are many reasons for this, including habitat loss, hunting, and the slow reproduction rate of the animals.

If we want to save the aye-aye, it is important to raise awareness about this amazing creature. We also need to work to protect its natural habitat. Only then can we hope to keep the aye-aye from disappearing forever.

We hope you enjoyed this list of aye-aye facts! Have a good day and check out our many other articles.